I got to see Flight of the Concords last night in Glasgow. Oh my God, it was brilliant. A perfect way to giggle through a Monday night.

My friend had used her ninja powers to get us tickets when they first went on sale (her powers are very impressive and have enabled me to see so many things I would never of had a chance to see). Then Bret broke his hand and the one Monday in June I was free and in Scotland was the date they rescheduled to. Thank you concert Gods.

Even the having to go to Glasgow knowing that you have to bomb it out of the venue to catch the last train back to Edinburgh didn’t dampen it. It also lead to a discussion, via a typically rambling, winding route to running. Specifically the fact that my friend and I are of the predator variety when it comes to running, i.e. we don’t run unless we have to and when we do have to it’s an impressive (impressive by our standards, not, say, an actual athlete’s or someone who actually exercises) burst of speed over a short distance. No stamina for longer distances but we can move fast when we want to. Obviously, this involved comparisons with animals (dinosaurs) so here are a few pictures I took in the Royal Ontario Museum the other week of our counterparts. 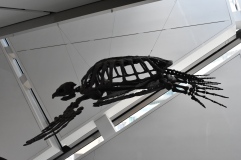